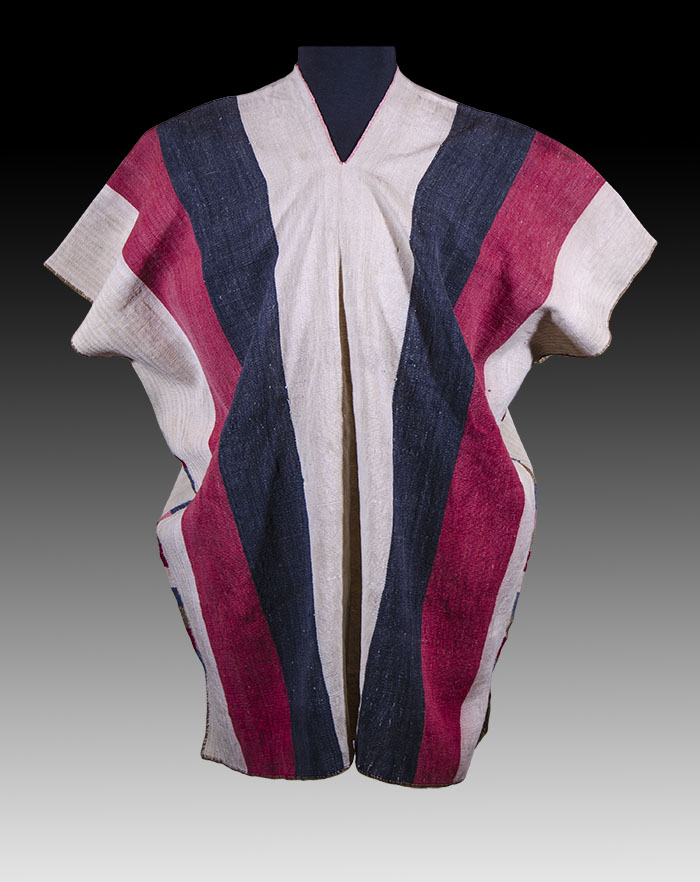 Very rare. Garment woven in a single cloth, on a stake loom, with four warp-faced edges, respecting the opening of the mouth during the weaving process. Once removed from the loom, this piece has been folded and sewn on its sides, leaving the openings free to pass the arms. The very fine yarn of high mountain alpaca has been used in its natural white color for the field and dyed with indigo for the blue stripes and with cochineal scarlet for the red ones. Measurements. Length: 75 cm / 29.52 in. Width: 70 cm / 27.55 in.

The sides exhibit lloque, a zigzag effect that is achieved by alternating several pairs of warp twisted in S with as many twisted in Z. We see this artifice in high-quality garments and carry the symbolism of divine protection for its owner.

The unku was the textile antecedent of the poncho for several centuries and lived with it for some time until it became a museum collection piece.

The unku of the Quechuas and the Aymara was the most important part of the men's wardrobe. The Spaniards gave it the name of camixeta or t-shirt since it resembled the shirt of the conquerors, as Father Cobo clearly points out for having our shirt made and each one is woven by itself, which they do not use to make long pieces like us and from there cutting clothes. (1)