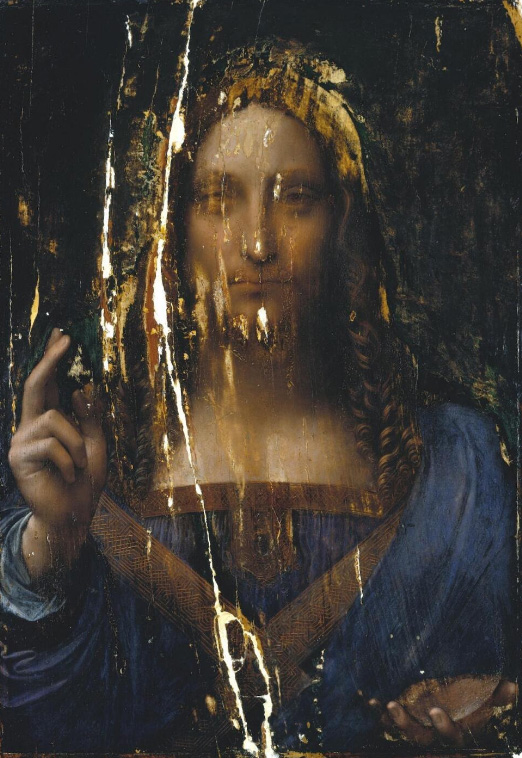 This is what Salvator Mundi looked like after being cleaned by Dianne Dwyer Modestini and prior to its restoration in 2006. Note the thumb of the raised hand. When layers of paint were removed, a previous position of that finger was revealed, a variation in the composition of the painting that argues that it is not a copy. Photograph Courtesy Dianne Modes / Wikimedia Commons. 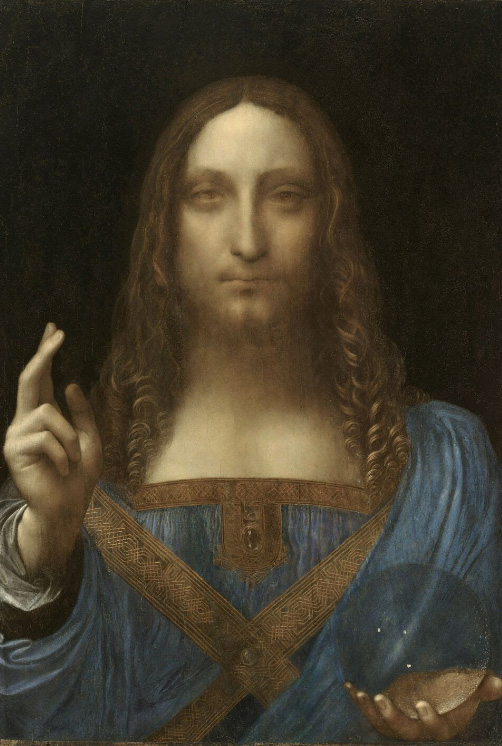 Salvator Mundi, Circa 1490-1519 after its restoration. Fine Art/Corbis via Getty Images/Wikimedia Commons. 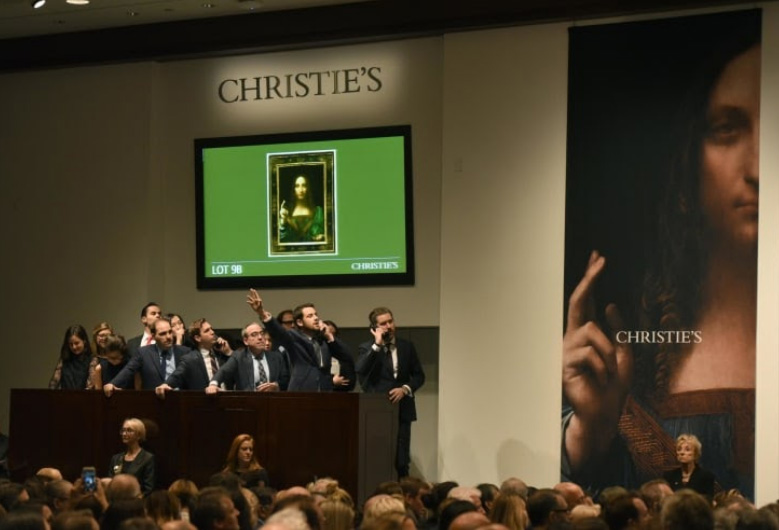 Christie's employees listen to bids for Leonardo da Vinci's Salvator Mundi at the auction held at its New York headquarters in November 2017. 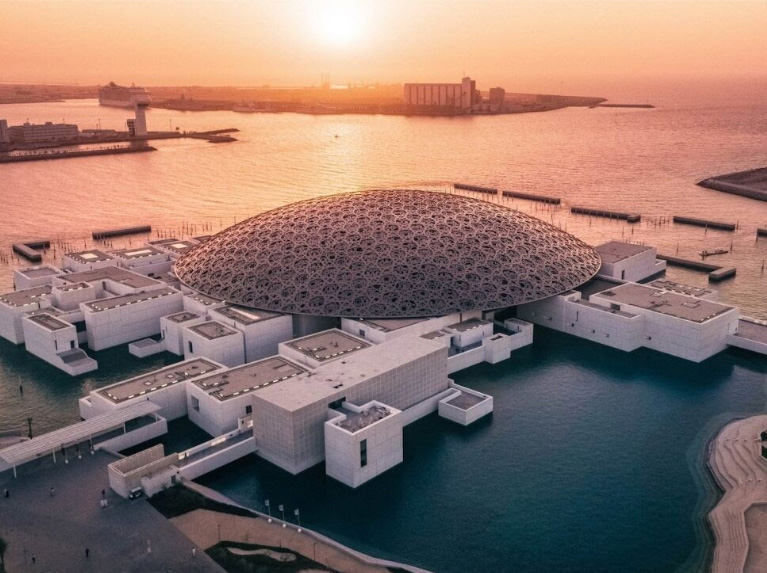 The modern Louvre Abu Dhabi museum, where the "last Leonardo" did not go. Photo Abu Dhabi Department of Culture and Tourism.

Two films were recently released about the course that surrounds the painting that starred in the highest sale in history -about 405.3 million dollars-, the Salvator Mundi, attributed to Leonardo da Vinci, nothing more and nothing less. We refer to The Last Leonardo by the Danish filmmaker Andreas Koefoed and The Amazing Case of the Last Da Vinci by the French Antoine Vitkine. Both productions have once again installed on the international scene the last painting rediscovered by the genius from Florence.

Art, the highest of human creations, that useless sublime reflection of the soul, of the immanent, of the transcendental and the eternal, awakens the most unstoppable and turbulent passions. It is so powerful that it is capable of intertwining the most emblematic of artists, the painter, anatomist, architect, paleontologist, artist, botanist, scientist, writer, sculptor, philosopher, engineer, inventor, musician, poet and urban planner, the Florentine genius. of the Italian Renaissance, with Arab princes, Russian tycoons, European kings, mega yachts, astronomical figures of money -and its laundering-, and intrigues, deceptions, scams, disappearances, greed and power. A story worthy of a novelist, it seems to be another chapter of The Da Vinci Code, the work of Dan Brown, since it involves the same artist, the same character (Christ) and even includes secret meetings in the basements of the Louvre museum!

IN THE FOOTSTEPS OF A SUPPOSED LEONARDO

The story revolves around a painting that some consider the discovery of the century, and others, the great swindle. A Salvator Mundi, that is, a Christ holding the Earth with his hand, while he blesses with the other. The work is painted on a wooden panel, measures 66 x 45 centimeters and was (or would have been) made around the year 1500. Let us observe the events surrounding this painting in chronological order.

It is believed to have been in the art collection of King Charles I of England. Painted for his peer Louis XII of France, it appeared in England when the French princess Henrietta Maria married the English monarch in 1625. It would have remained in his apartments in Greenwich, and was identified as A piece of Christ done by Leonardo ( A piece of Christ made by Leonardo) in the records of the sale of the Commonwealth of 1651. However, at the very origins of this story divergences already arise. Professor Jeremy Wood places Leonardo's Salvator Mundi in the Chelsea home of James, 3rd Marquess, later Duke of Hamilton, between 1638 and 1641.

The painting was auctioned off in London in the late 18th century and reappeared in the early 20th century in the collection of an amateur art lord, Sir Francis Cook. In 1958 the American Minnie Stanfill Kuntz bought it in London, at a Sotheby's auction, as part of a lot belonging to Da Vinci's school; In order to win the bid, she paid the ridiculous value of 45 pounds. When her owner died in 1987, the painting was inherited by her nephew Basil Clovis Hendry, who kept the painting in his home in New Orleans, hanging under a staircase, in an unimportant part of the house. After Hendry's death in 2005, his son decided to sell his father's art collection. It was at that moment that a Christie's employee toured the house and in front of this painting, affirmed "this is not for me", sentencing his fate as the worst art dealer in history... At last, this and other paintings they ended up being sold by a small New Orleans gallery in April 2005. The protagonist of this story was bought by New York dealers, Robert Simon and Alexander Parish, for $1,175.

Under their expert eyes they soon understood that, cataloged as a late copy of a painting by Boltraffio, Da Vinci's disciple, their story was different. They observed the resemblance to a 17th century engraving that reproduces what is known as "the lost Leonardo", and thought that it could not be a copy, but rather the painting of a disciple of da Vinci, or even more.

The dealers commissioned the restoration to distinguished curator Dianne Dwyer Modestini. After cleaning the work and removing layers of paint added in different interventions, the expert began to doubt. She observed the traces of the upper lip of Christ in the image, the same as those of the Gioconda, and a significant discovery: under layers of paint there was a correction by the artist himself on the thumb of the raised hand. That is, only the person who is creating corrects the composition of his work, such as the position of the fingers, not a copyist when reproducing the original of another author. Such facts convinced her: this was a true da Vinci.

Thus began a sequence of expertise with specialists from around the globe. It was finally presented in 2011 at the National Gallery in London as The last Leonardo, thus confirming its authorship. Not all museum staff agreed, and yet a benevolent firm legalized the work, that of Martin John Kemp, British art historian and exhibition curator, one of the world's leading authorities on the life and work of Leonardo da Vinci. . Many argue that his inclusion in the British gallery show was a marketing campaign. The truth is that the exhibition attracted the attention of thousands of people who even slept at the doors of the museum and came to pay 400 dollars for a ticket to discover for themselves the reason for so much mystery, while at the same time it was a legitimizing act which allowed the price of this Salvator Mundi to be set at 100 million dollars.

Robert Simon and Parish eventually sold the painting to a Monaco-based Russian oligarch named Dimitri Rybolovlev. The transaction ended in court, since the Russian paid 127.5 million dollars for the painting, while his trusted man in the purchase of works of art, the Swiss merchant Yves Bouvier, actually paid 83 million to the Americans. Bouvier is the owner of one of the largest free ports of art, Geneva, a mix between a safe and a tax haven that guards pieces acquired by billionaires and stored duty-free. The story ended with a 44 million fraud lawsuit against the Swiss, and a new listing by Christie's in New York, starting again from Singapore, where the Bouvier deposits are, to New York.

ITS LAST SALE, AND THE HIGHEST IN HISTORY

The great Christie's auction house dispelled any doubts regarding its authorship with an "entirely painted by Leonardo", and offered it with a title identical to that presented in the London museum, The last Leonardo.

That November 15, 2017 went down in history as the night a painting was sold for the highest figure ever, 450.3 million dollars. An anonymous bidder took over the work, raising his bet to 20 million dollars... The mystery was soon revealed, his buyer was the crown prince of Saudi Arabia, Mohamed Ben Salman. That prince and tycoon is well known for his excessive purchases. In 2015 he acquired the most expensive property in the world, the Château de Louveciennes, located on the outskirts of Paris, for 275 million euros. And among other surprising assets, he owns a gigantic yacht, the "Serene", bought for 458 million dollars.

The sale of the painting was a success, yes, but there were still doubts about its authenticity, or rather, more certificates were missing to prove the authorship, and justify the huge outlay of money from the Saudi. A year later, the president of France, Emmanuel Macron, met with Mohamed Ben Salman to sign commercial agreements worth between 15,000 and 18,000 million euros. According to French sources, an expert opinion from the Louvre was agreed upon at this meeting. This is how the painting arrived in June at the C2RMF, the best laboratory in the world for the analysis of works of art, located in the basement of the Louvre Museum. He stayed there for three months and underwent all kinds of tests. According to Chris Dercon, president of the Meeting of National Museums of France, to the filmmaker Vitkine, Leonardo only contributed to the realization of the work. There is no possible doubt. Only the Saudis were informed.

The Saudi prince wanted his painting to be exhibited together with La Gioconda in the exhibition for the 500 years of Leonardo that was being prepared at the Louvre in 2019, and presented as a work 100 percent painted by Leonardo, definitively authenticating his authorship. . However, the French cultural authorities and the museum did not accept this condition, and Mohamed Ben Salam finally did not lend the work to the Louvre, with the consequence that it was not hung in the Louvre Abu Dhabi, the mirror museum of the French located in Abu Dhabi, either. the capital of the United Arab Emirates. The last Leonardo, the reappeared painting, then disappeared again. There are those who say that he is on board the "Serene", while others maintain that he sleeps in the safe of a bank or a free port.

Salvator Mundi is now the only painting by Leonardo da Vinci in private hands, and one of the few, barely a fortnight, that make up the total number of paintings by the Florentine genius. Many maintain that claiming a work of universal value for a private collection, or that it ends up on one of the walls of the Louvre Abu Dhabi or in another public museum in the Middle East, is not its rightful place culturally and historically, it is a terrible injustice . Perhaps this is so, as is every Egyptian, Arab, African or American work preserved in the great European museums, considering, in favor of the Arab prince, that Salvator Mundi was bought, while all the others, for the most part, were looted. Many will believe, skeptical, that it is not really a da Vinci, others, happy, will support the miracle of this apparition. Was the Arab prince made of perhaps the most important painting in Western culture, the discovery of the century, or as others maintain, was he duped as a nouveau riche?

We celebrate that art, the highest of human creations, continues to awaken the most irrepressible and turbulent passions...

Here is the official trailer for Andreas Koefoed's The lost Leonardo: HERE

Here The Amazing Case of the Last Da Vinci by Antoine Vitkine, full film, with French and English subtitles: HERE