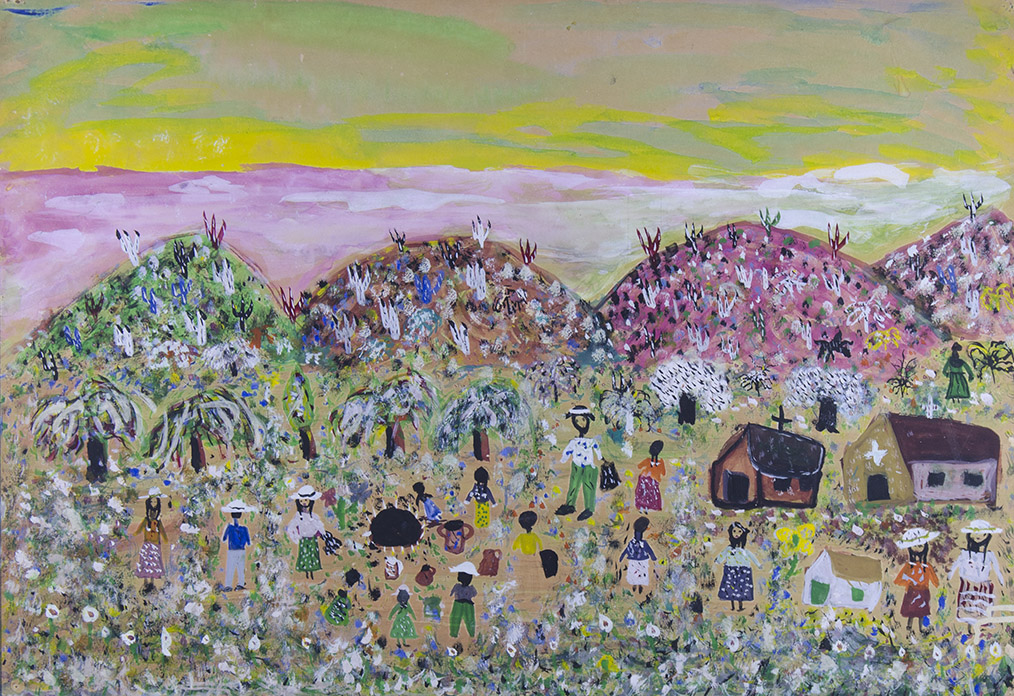 For Fomento Cultural Banamex, he was part of the curatorial staff for the exhibition Grandes Maestros del Arte Popular Iberoamérica, and as an academic advisor he collaborated in the exhibition América Tierra de Jinetes. He collaborated with texts of his specialty in the books published on the occasion of both exhibitions.

To define this complex universe of objects created by man, a good number of titles are used, such as crafts, Creole art, rural art, traditional art, applied arts, decorative arts ... and if they come from makers with the identity of the native peoples, ethnic art, tribal art or native art.

The whole set has the same matrix that gives it its character. Behind every work there is an office; for the realization of it, man and his hands are above all machines -used only occasionally-, having tools, which are also usually made by the artisans themselves and making use of an enormous diversity of raw materials.

Furthermore, each object must be unfailingly utilitarian. And in its functionality lies a good part of the reason for being in these handmade pieces.

Then there are other elements that contribute to its success, such as beauty, ritual character or the symbolic charge that is manifested through a knowledge perpetuated in the community oral transmission.

This heritage makes up the identity of each nation, town, or region. The design in a piece can offer us clues about its cultural and geographical origin, whether it is a ceramic, a silver knife or an expression of traditional basket weaving. In each profession, with the passing of time, styles were created that express times and places. Knowing its chronological and geographical limits is an essential aspect in the study of popular arts, especially when there are few crafts where the author leaves us his name in the work itself.

Visits to museums and private collections, together with bibliographic and iconographic sources and interviews with master craftsmen are essential to advance in this regard. Visiting their production workshops and touring their places at fairs and exhibitions facilitate the transition to greater knowledge under the guidance of their protagonists, the authors of each work themselves.

Contact with the artisans is of such importance that we suggest a question guide to use in a first meeting; it is simple but as a memory aid it provides a great utility to optimize this dialog. The life stories of its makers as well as its users enrich the value of the collected works and facilitate bridges of contact with other authors and eras. Each object has different ways to access its soul, and reaching that level is a privilege that requires information and knowledge, as well as a particular sensitivity.

How are collections born?

Perhaps its origin was a trip to a remote place from which we return with strange, captivating objects that are as beautiful as they are enigmatic. That first step led to readings about that exotic art for us and new searches. One "piece" brought another and unintentionally, that collection that makes us proud today was born.

Perhaps the set evolved with a life of its own, as often happens. One piece aroused our attention and was the master key to enter that world in an unexpected way, and then another and another came ... Inadvertently, we found ourselves buying a first book on those crafts that give rise to the pieces that have captivated, and thus we become collectors, proud of our treasures, knowing a little more about its secrets every day.

More than twenty years ago I bought a research about the popular art of the world (1) in a fair of old and second-hand books (2) in the heart of Madrid. Enthusiastic, I looked for a coffee shop to enjoy it with the running of its leaves and somehow I noticed that its author, Juan Ramírez de Lucas (3), lived in that city at least when he wrote it, some time ago. I looked for his name in the phone book and from there I dialed his number on a public telephone -describing this scene already tells us how much water has flowed under the bridge from then until today- and a couple of hours later I visited his home on the Gran Vía. He was an older man and he delighted me with anecdotes and stories; art critic and writer, he had traveled the world. The collection was immense and I always remember one of his formulas: traveling with two suitcases -one inside the other- and in the smallest his clothes and other accessories. You can imagine, the largest suitcase returned full of pieces, and don Juan, full of joys.

In the set -as is often the case in popular arts- very few works bore the signature of their author, but all had an unquestionable cultural identity. And the library that accompanied this collection was as huge as it was useful. Ramírez de Lucas always went to those volumes and in those hours, on several occasions he searched the pages of a book for that fact that confirmed his memory judgment. (4)

Years later, on a visit to Albacete (Spain) as the curator of an exhibition on the gaucho knife (5), local officials of Culture invited me to visit a museum of popular art around the world, soon to be inaugurated. The surprise was great when, when walking through those rooms with pieces of the most diverse origins, we came across the donor of the collection; it was that octogenarian I had known some time before, Juan Ramírez de Lucas. We both remember with joy that Sunday in Madrid.

2. Coinciding a visit to Madrid with the Spring Fair in Paseo de Recoletos is a privilege that is enjoyed. I have traveled it for years -from the end of April to May 15- and I can assure you that it always delivers new surprises. Thousands and thousands of books on the most varied topics and prices.

3. Juan Ramírez de Lucas (1917 - 2010) would have been the source of inspiration for Federico García Lorca (1898 - 1936) in an unpublished poem dedicated to "the blonde from Albacete", as the recipient of those loves made it known to his family shortly before he died. A letter from the poet shot in the Spanish Civil War -one of the most important authors of the Spanish-speaking literature of the 20th century-, sent shortly before his execution, where he expressed, "Juan: you must laugh again. Fat things have happened to me, not to say terrible things, and I have fought them with grace", and that unpublished poem, testimonies of a forbidden feeling, together with a text by Ramírez de Lucas await an agreement between the heirs of both protagonists to see the light in a printed version.

4. In the next virtual Newsletters we will bring you a basic library of folk arts, ordered by subject.

5. The exhibition, entitled "The gaucho and his knife", was held in 2005 at the Albacete Cutlery Museum, the only one on this subject in Spain, the city being a historic center of this trade.

Model questionnaire, to be used in interviews with artisans.

1) Name and surname of the interviewee. Place and date of birth.

2) How did you get started in the craft?

3) Can you tell us who your teachers or teacher were?

4) How do you get the raw material?

5) Do the shapes and decoration of your works correspond to a local style? If so, can you tell us the main features of that style?

6) If in an order you are asked for details or designs that do not correspond to the style or styles that you make regularly, do you accept it in the same way and execute the piece?

7) Throughout your life, have you modified your pieces -in technique, materials, designs, styles- to the point of being able to order them chronologically? If so, can you give us some guidance?

8) Do you know museums or private collections where pieces of your authorship are found?

9) Have you formed disciples who identify you as his teacher?

10) Place and date of the interview, together with his personal data.

Explanatory note: each question has a meaning that makes it of utmost importance. Have this information, do not hesitate, it will be useful to analyze, compare, differentiate and appreciate the pieces of this and other artisans.