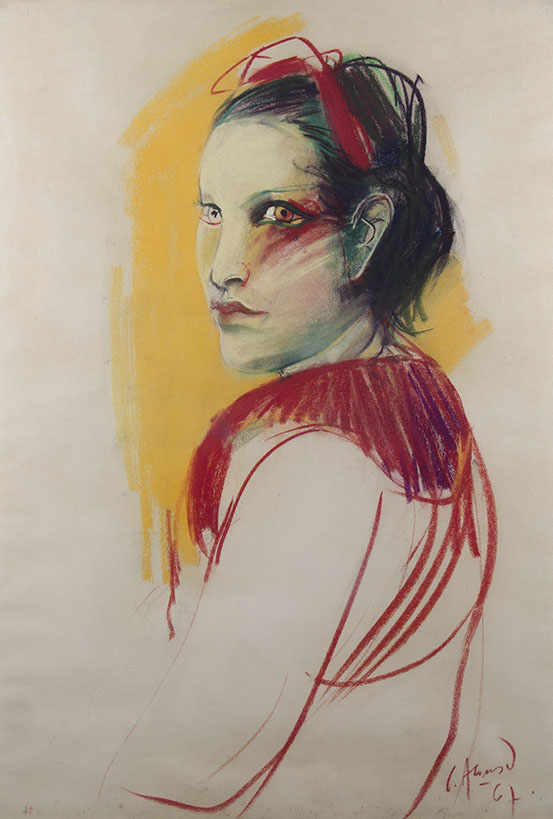 Portrait of a young girl. With her torso completely in profile, she turns her head to show us an interesting face, which will have caught the attention of maestro Alonso fifty-four years ago, to perpetuate it in this large-format work. Done with agile strokes of oily pastel pencils, it takes on a greater degree of detail as it approaches the features of her face, focusing our attention on her feline gaze.

Carlos Alonso (Tunuyán, Mendoza, 1929) is an Argentine painter, draftsman and printmaker. At the age of fourteen he entered the National Academy of Fine Arts in the city of Mendoza. He had as teachers Sergio Sergi, Lorenzo Domínguez, Francisco Bernareggi and Ramón Gómez Cornet. He received his first prize at the Student Hall in 1947, and in 1953 he exhibited at the Viau Gallery, in Buenos Aires, which provided him with the economic means to travel, a year later, to Europe, where he exhibited in Paris and Madrid. In 1951 he won the first prize at the San Rafael (Mendoza) Painting Hall, the North Hall (Santiago del Estero) and the drawing at the North Hall (Tucumán). He is a prolific book illustrator; among other titles, the Creole Ballads, John's Anthology, the Divine Comedy, The Rabid Toy, Irene, Anatomy Lesson, and Mano a Mano stand out. In 1957 he was the winner of the competition organized by the publishing house Emione to illustrate the second part of Don Quijote de la Mancha and Martín Fierro (1959).

Alonso, a central figure in Argentine art, participated strongly in the debate on realism and the survival of painting. In the same year that the work we auctioned was dated, he held his famous exhibition at the Art Gallery International of Víctor Najmías, where he mainly presented the series Variants for a portrait of L.E.S., reflections on the lives of artists that he later continued with Van Gogh, Monet, Renoir, Courbet and others. In his drawings of the sixties the study of the old masters is perceived, especially Rembrandt, who notably marks his self-portraits.

His painting is also a testimony and memory of Argentine history, in particular Anonymous Hands.