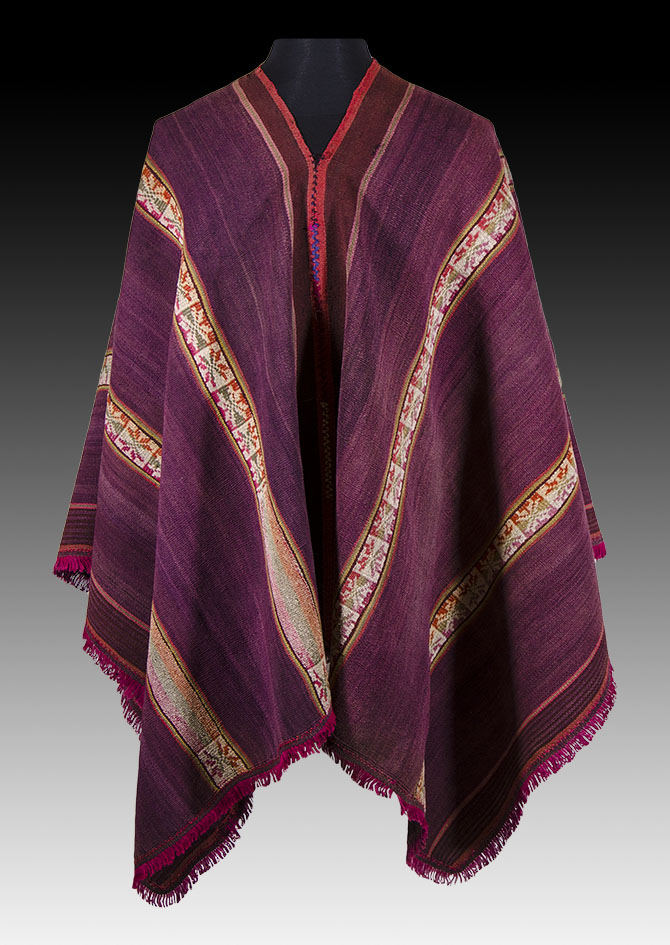 Remarkable poncho woven on a stake or ground loom, called pampa away, warp-faced, with sheep's wool dyed with natural dyes. In the case of the pampas (the plain weave field) cochineal has been used with the addition of iron sulfate to achieve the burgundy purple color. Measurements: Length: 158.5 cm / 62.4 in. Width: 144 cm / 56.7 in. Fringes: 2 cm / 0.78 in. (1)

For the four labor streets -which in this ethnic area are called salta (2)- the Andean technique has been used with a complementary warp of double threads and a design of topacos (squares or rectangles) that enclose figures and alternate their color of base and that of the figure as in a chess board, the figure being white and the background colored, to be inverted in the following table: the background white and the figure colored.

This topacos (belt) design is faithful reference to the influence that the Inca occupation of its territory left as an imprint. The Inka army occupies the area around 1450, after defeating the resistance of the Charka Confederation. The imperial domination generally combined two integration policies: violent and destructuring, with massive displacements of the rebel population, or assimilating and respectful of local organizational forms ... In the case of the Charka Confederation, the Incas assimilate them as Inca warriors and they allow the continuity of local dynasties and structures. The ayllus thus maintain their identity and their patterns of political and social functioning () (3)

The ornamental flower motif is interrupted by the legend Luis Cahuiara or Caguaria, probably the name and surname of its owner, rudimentary copied by the artisan, who gave this piece of lloque, on the edges (zig zag appearance obtained by alternating in the warp of groups of threads twisted in S, with others twisted in Z), an element that goes beyond the decorative to give divine protection to the wearer of that poncho, according to the religious tradition of the highlands.