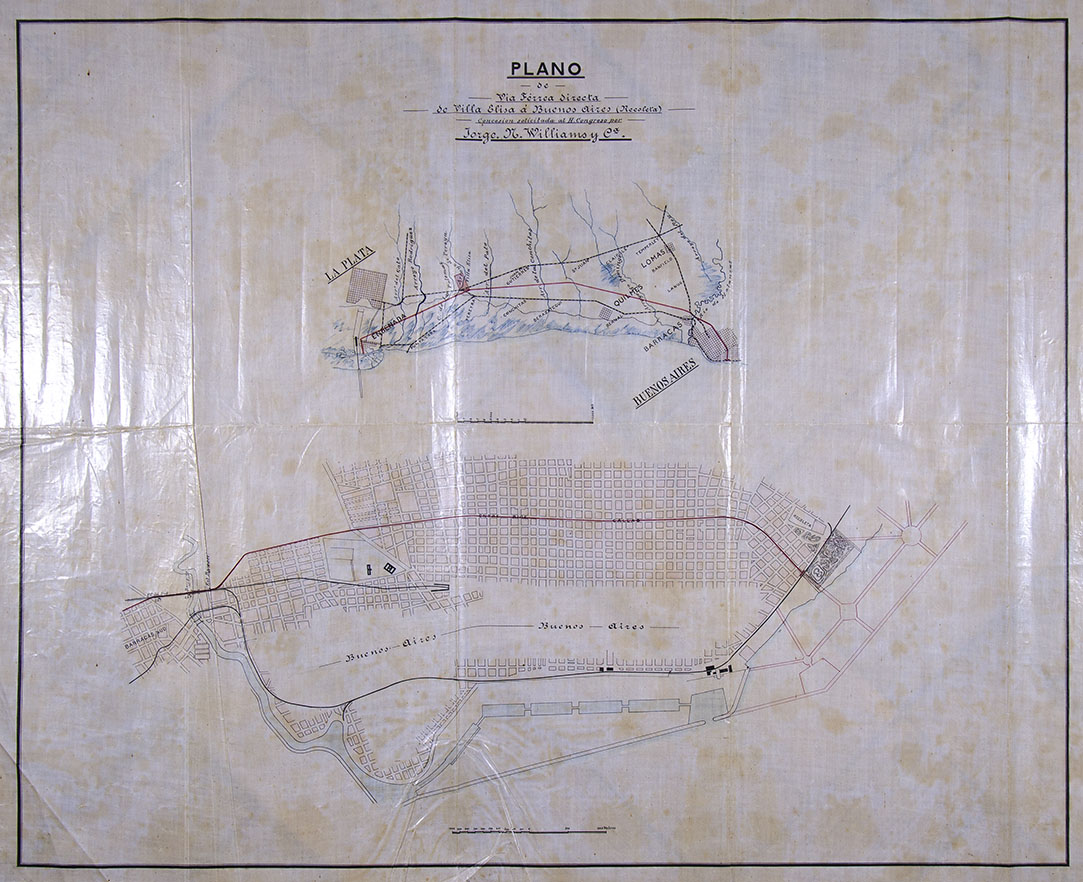 Plan for the direct railroad from Villa Elisa to Buenos Aires (Recoleta).

Under its title, we find the map of the banks of the Río de la Plata with the railway line that connects Buenos Aires with the city of La Plata, and from Villa Elisa -in the project we see that the trace continues to Ensenada-, the projection of the new branch that entering the city of Buenos Aires through Barracas, crosses it to the Retiro neighborhood. The upper map shows the references to different cities and towns such as La Plata, Barracas, Lomas, Quilmes, Berazategui with drawings on the magnitude of each one and the different water courses that flow into the great estuary of the Plata.

In the lower half of the original there is a map of the city -of the sector where the railway line would advance-, from said bridge with the Barracas Station to the North, and in red the projected line that advances through Entre Ríos and Callao until The current Del Libertador Avenue -by then called Paseo de Julio-, is located the station that was planned to be built.

On the coast of the river, the city of Buenos Aires had already approved Eduardo Madero's project, as we can see in the sketch of the port, with its four dikes, two access docks and the filling of the lower reaches of the river. These works were concluded in 1898. The project signed by Jorge N. Williams sought to bring the city of La Plata and its neighbor Villa Elisa (1) with the Recoleta neighborhood, in the city of Buenos Aires, where many lived of the civil servants that evolved in the new provincial capital. However, the project did not achieve government approval.

Its author, Jorge N. Williams (Buenos Aires: 1857 - 1925), after a promising career in the Ferro Carril del Oeste, in 1889 came to exercise a high executive position in its board of directors and the following year, he held the position of secretary General of the Municipal Administration in the administrations of Francisco Seeber, Francisco P. Bollini, Miguel Cané and Federico Pinedo, also in the mandate of Adolfo Bullrich. In 1892 a municipal decree, his work, gave rise to the National Children's Trust, and among so many functions he was a member of the board of directors of the National Directorate of National Railways and a high-ranking executive in the National Mortgage Bank.

1. First identified as Empalme Pereyra station site -because of the proximity of Leonardo Pereyra's stay-, in 1888 the provincial government approved the initiative presented by Francisco Uriburu to subdivide a new settlement that would be named in honor of his daughter, Villa Elisa . At that time Uriburu held a high ministerial position in La Plata, and a magnificent residence was built in this place, a palace that fell prey to fire in 1960.