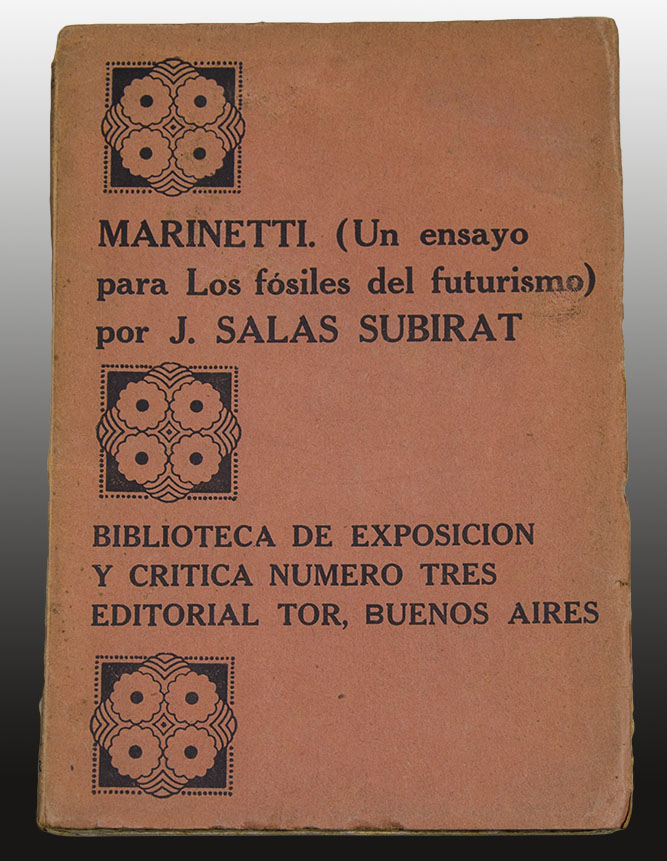 Marinetti (An essay for the fossils of Futurism).

Library of the Exhibition and critic number three. Ed. Tor. 1926.

In the year of Marinetti's first trip to Argentina, the Tor publishing house distributed this title authored by José Salas Subirat (Buenos Aires: 1890 - 1975), poet and essayist, famous for his translation into Spanish of James Joyce's Ulises, task that many considered impossible and later, they considered insurmountable.

The reasons that gave meaning to this book are analyzed in depth by May Lorenzo Alcalá in "The elusive footprint of Futurism in the Río de la Plata", noting that the first use of the term Futurism corresponded to a Catalan Spanish: Gabriel Alomar i Villalonga. It was Rubén Darío who questioned Marinetti's paternity of futurism, spreading the word about Alomar's finding, who coined the term in a 1904 conference written in a book the following year. And a contribution from Lorenzo Alcalá, in Alomar's group of friends was Joan Torrendell, who emigrated to Argentina and founded the Tor publishing house in Buenos Aires.

To receive Marinetti on his first visit to Argentina, Torrendell commissioned Salas Subirat the text that he published under the title of "Marinetti (An essay for the fossils of futurism)", where a critique of Marinetti's futurism is developed, "as revenge of the plagiarist and, at the same time, as a tribute to his friend, the precursor -as expressed by May Lorenzo Alcalá, in reference to Alomar. (1) The truth is that this work is one of the most elusive among the titles published in the splendor of Futurism in Argentina.