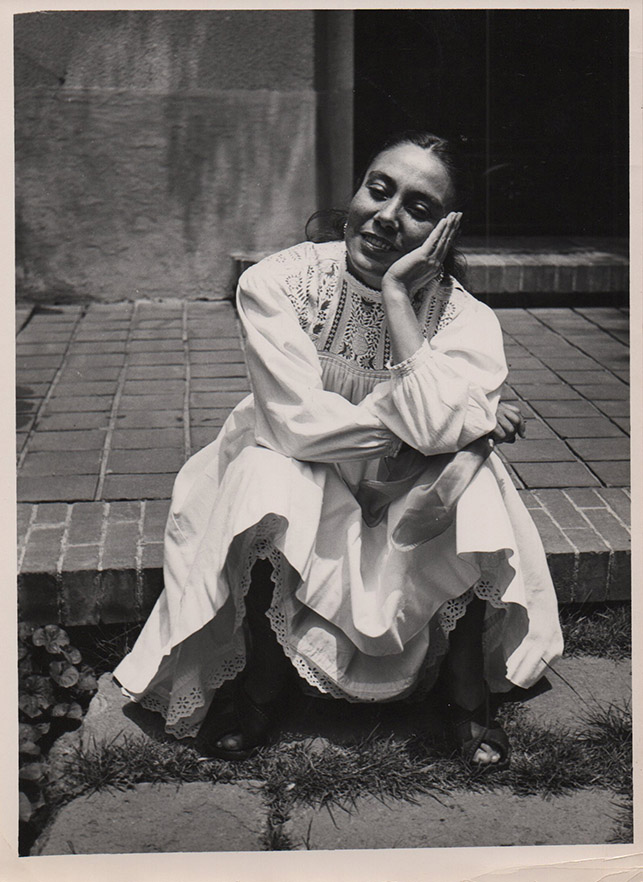 Portrait of Rosaura Revueltas. Mexico. Circa 1955.

Rosaura Revueltas Sánchez (1910 - 1996), Mexican actress, dancer and writer, is especially remembered for her leading role in the North American film La sal de la tierra (1954), where she played the wife of a miner who, along with the other wives, ends up leading the men's claim against the inhumane conditions of that work. The film and her as an actress gained international recognition, but at the height of McCarthyism they were censored in the United States, and Rosaura, arrested and deported to her country, entered the blacklist of the Committee on Anti-American Activities, preventing her from acting again in Hollywood. . The film shows a workers claim that derives in a feminist plea of ​​great emotional force.

Here we see her in an outdoor portrait in full sun -zenithal light- wearing a traditional white dress and in a relaxed, happy gesture, before the camera of this unique European photographer, so linked to the women of Mexico.

Born in Grayevo, Poland, Bernice Kolko (1905  1970), emigrated with her family to the United States in 1920, returning in 1932 to Europe, where she briefly studied photography under Rudolf Koppitz in Vienna. After the rise of the Nazis in Germany, she returned to the United States, establishing herself as a photographer, first in New York and then in Los Angeles. Around 1944, during World War II, she enlisted in the army to serve as a photographer. Later and until her trip to Mexico in 1951 she will open her photography to experimental practice.

Although she arrived in Mexico as a tourist, the good reception her work received encouraged her to stay and live there. It is the critic Antonio Rodríguez who began to write about her work in several newspapers. Along with another text by Elena Poniatowska, an essay by Rodríguez accompanies the publication of the monographic issue of Artes de México dedicated to Kolko's "Mujeres de México", a series that was exhibited in 1955 in a large exhibition hanging in the Palacio de Bellas Artes of Mexico and also, in Canada.

As for an exclusive book of this project, he never edited it, but many of his records were part of two of his first titles: "Faces of Mexico'', edited by UNAM in 1966 and "Mexican Semblantes", from 1968, the one that accompanied an exhibition that toured the country. Bernice Kolko was definitely one of the great photographers of the 20th century who worked in Mexico.

We appreciate the biography provided by the Mexican specialist, Dr. Laura González Flores, dedicated to teaching, curating, criticizing, and theory of photography.