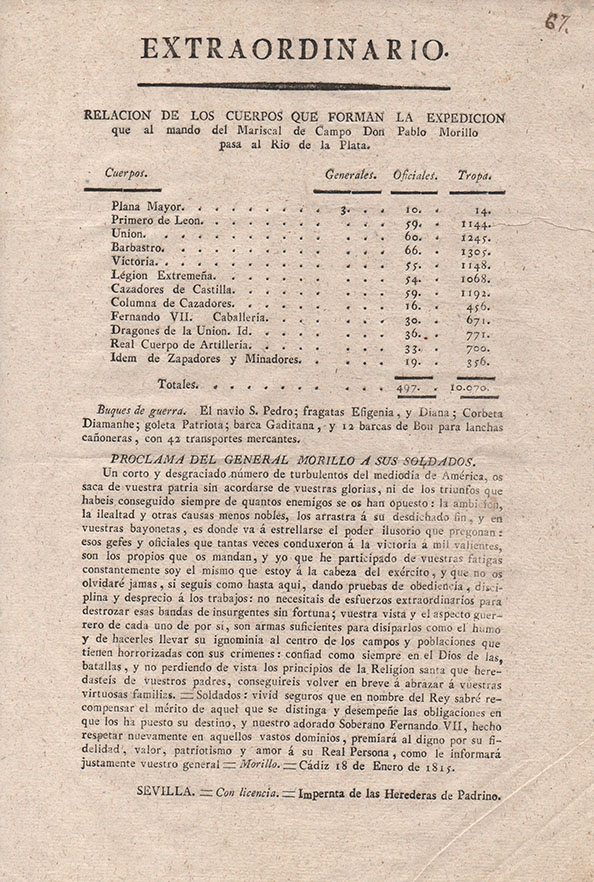 WHEN SPAIN WANTED TO RECOVER ITS AMERICAN LANDS

Extraordinary. List of the Corps that make up the expedition under the command of Field Marshal Mr () to the Rio de la Plata. () Proclamation of General Morillo to his soldiers. (Text:) A short and unfortunate number of turbulent midday in America, takes you out of your homeland without remembering your glories Cádiz January 18, 1815. Seville -With license - Print of the Godfather Heirs.

Spanish print with the detail of the bodies that made up the expedition that under the command of General Pablo Morillo would sail to Buenos Aires. The news was received with concern in this city, where preparations were not delayed.

With the support of the other sovereigns of the European powers, Fernando VII had arranged to organize an expedition to quell the rebellions unleashed in the American colonies, and in 1815, General Pablo Morillo commanded the punitive forces that left for America. Although in principle this expedition had as its destination the banks of the Plata, finally it sailed towards the lands of the Captaincy of Venezuela and the Viceroyalty of New Granada.

Initially, his actions paid off and the Spanish monarch recovered the rebellious dominions, but after the Creole forces under the command of Simón Bolívar were rearmed, they gave him a definitive defeat in Boyacá, in 1819.