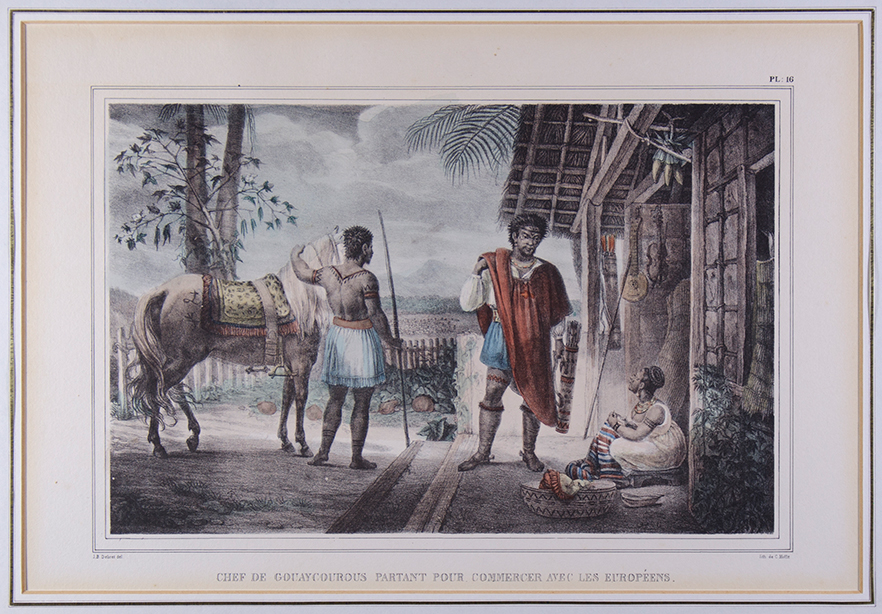 Chief Guaicurú leaving for trade with the Europeans, is a lithograph made by C. Motte to form plate 16 of the first volume of the album Voyage Pittoresque, published in 1834. It shows Chief Guaicurú at the door of his home, waving to his wife before leaving, while she, sitting on the floor, embroiders a textile. Beside the couple, an assistant holds his horse. All the characters wear their skins decorated with drawings. The chief wears a poncho - here painted red - holds a quiver of arrows and wears spurs. His horse wears a tool with jaguar skin and wooden stirrups. The details inside the home also arouse interest. Another quiver with arrows and two musical instruments.

Work of the great traveling painter Jean-Baptiste Debret, we turn to the study carried out by J. Bandeira and P. Corrêa do Lago -cited in the previous batch- to analyze this iconography. On page 515 of Debret e o Brasil [1] we observe two stages of this work, the watercolor (A-31), and the print (G-16), naturally inverted, and with certain differences, as an addition from the periphery of the entire composition, namely the complete horse and the tree behind it -the original watercolor only represents its head and front legs-, a tree behind the horse, and the walls, windows and roof of the ranch. There are also some wicker baskets added in front of the female character and the clothing and position of one of the arms of the central character. The watercolor was painted in Rio de Janeiro in 1823 and currently belongs to the Museus Castro Maya in the same city.

According to Debret: The wild indigenous people called Guaicurúes are found in Brazil, in the province of Goiás, on the banks of the Uruguay River and also in the province of Mato Grosso (...) The special occupation of the Guaicurúes consists of the trade of different species of animals that they gather in the vast prairies, where they usually build their rooms. Their ancient civilization brings them quite close to the Guarani, as they have different classes in their population; forming three very different: the first is of the noble captains, heads of families who command the soldiers and the slaves; the second is that of the soldiers, who only fight on horseback and are subject only to military discipline; the third is made up of slaves and is formed, in part, by prisoners of war who carry out all kinds of domestic work, the most tiring of which is the formation of herds and their herding to buyers.