BELGIUM PHOTOGRAPHY BEGAN IN THE WORLD.

Vintage albumen photograph of Bate & Cía. Montevideo. 1866. This copy is part of our next Online Auction, Hilario XIV, which will take place in December 2021. 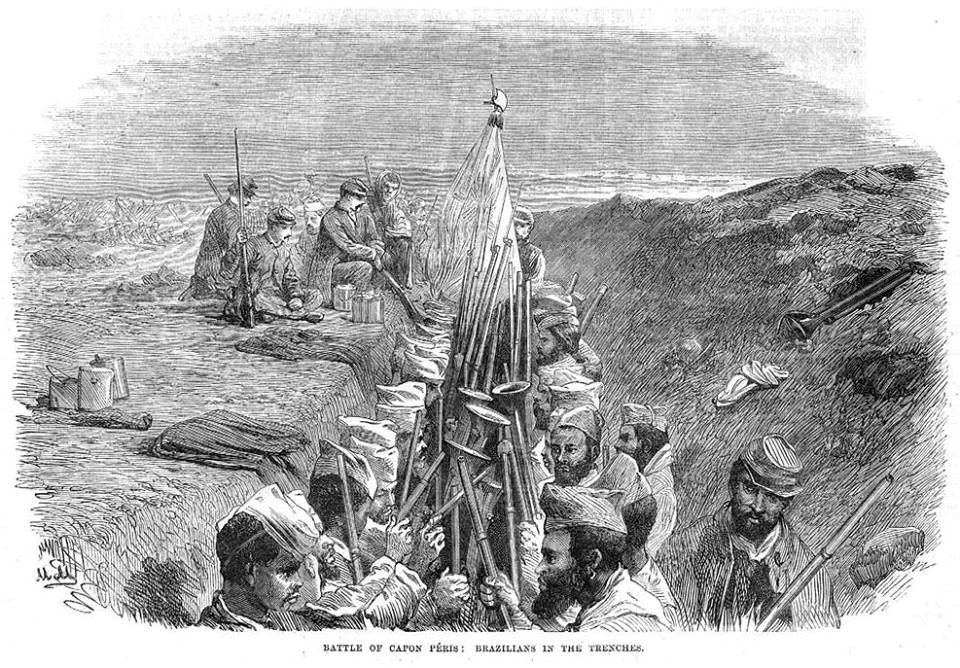 "Battle of Capon Péris: Brazilians in the trenches". The Illustrated London News, 6 Octr. 1866. This engraving, published by the London press of the time, tells us about the technical difficulty that existed at the time to reproduce a photograph. Hence, the resource and the solution of the art of a skilled draftsman, author of this beautiful lithograph, making use of the photograph of yore, which here due to obvious identity confusion, is attributed to Brazilian soldiers. 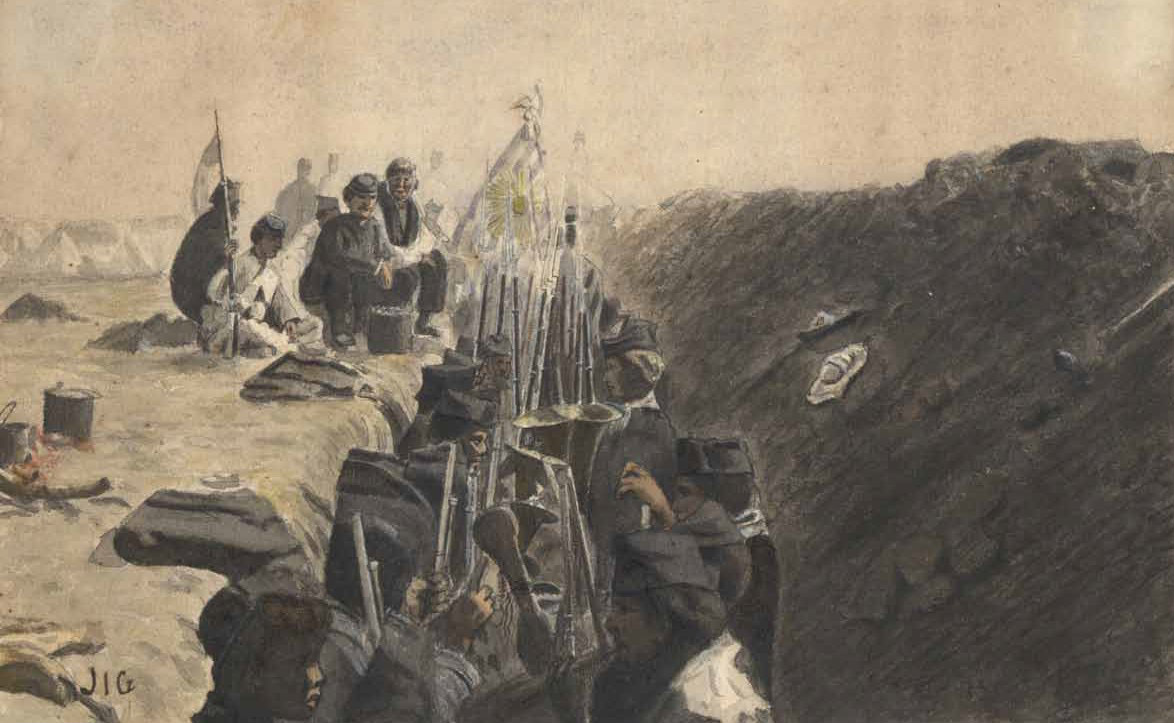 Graduated in History from the Universidad Católica del Uruguay "Dámaso A. Larrañaga" (2002).

He has specialized in the investigation of ancient military iconography, South American war photography (XIX and XX centuries), historiography and organization of the forces faced in the War of the Triple Alliance. He has collaborated with the National Historical Museum and the National Library of Uruguay in identifying pieces from their collections. He has participated as an exhibitor in the international meetings on the history of Paraguay at the Montevideo University (I, II, III, IV and V Conference), and the War of the Triple Alliance in Paso de los Libres, Corrientes, Montevideo, Asunción, Uruguayana, Buenos Aires, Aquidauana and Corumbá (2012-2019).

Among his collaborations and publications are: Javier López, photographer for Bate y Cía during the Paraguayan War, in the Historical Bulletin of the Army (Montevideo, 1997). "Naval Uniforms, National Navy" (Montevideo, 1999); The Paraguayan War in Photographs (Montevideo, National Library, 2008); series of 13 biographies that were published in different volumes of the Spanish Biographical Dictionary (Madrid, 2012); and "Relations between photography and other iconography of the Paraguayan War" in Folia Histórica del Nordeste, No. 25 (Resistencia, Chaco, Argentina, 2016).

The Uruguayan battalion "April 24" in the trenches of Tuyutí: notes on a photograph of Bate & Cía

The famous photographic studio Bate y Cía, established in Montevideo since 1861 and run in 1865 by the Belgian photographer and chemist Juan de Vander Weyde -a former associate of the firm- requested and obtained in May 1866, patronage of the Uruguayan government. This support consisted of facilitating the transfer of a photographer and his equipment to Paraguay, a country where a bloody war was taking place between the allied armies of Brazil, Argentina and Uruguay, against that of that republic.

It was the first days of June 1866, when Javier López, a photographer commissioned by Bate y Cía, embarked for Guaraní soil with the task of photographing scenes from that war. On July 31, 1866, López returned to Montevideo, according to the newspaper El Siglo, the newspaper that best recorded the photographer's work in Paraguay. From the "views" obtained in that first coverage, we can specify his photographic activity in the period between June 1866, highlighted by the intense bombardments of the Paraguayan artillery against the allied army; and July of the same year, in which, among other fierce fighting, the Battle of Sauce or Boquerón took place, where thousands of combatants from both sides found death.

El Siglo highlighted the "very favorable success" of the Bate y Cía company, as well as the glory "of being the only one that has dared to cross the Paraná, penetrating the secular forests of Paraguay. Soon the first collection - made up of 12 "views"- was put on sale, which included the corpse of Colonel León de Palleja, head of the "Florida" battalion, being watched over by his officers and soldiers, considered by the specialist. Brazilian Ricardo Salles -recently disappeared- as perhaps the best obtained during the conflagration. 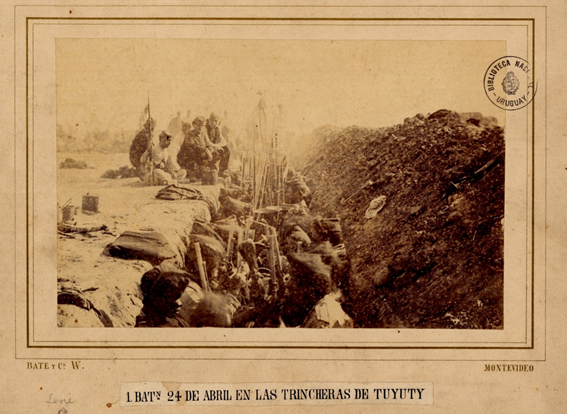 The one that had the privilege of being considered "first sight" of the album, carried the following legend: "1. BAT.N APRIL 24 IN THE TRENCHES OF TUYUTY"; stamped on a paper with a unique typeface, peculiar to this first series. The same paper, cut out and glued to the bottom of the cardboard passpartout that can be seen in all the photographs in the collection that bore the title of "The War against Paraguay.

A common denominator in the warlike events of Javier López's time in Paraguay, both the Allied and Paraguayan artillery, and especially the latter, were lavish in his diary and stubborn bombardment of him. The Uruguayan troops, because they were in the vanguard, often suffered the devastating effects of the Paraguayan projectiles.

In the image marketed by Bate & Cía, officers and soldiers from the eastern infantry battalion can be seen in their trench, protected from enemy shrapnel. The troop armed with carbines and rifles "a la Minié", wears the traditional barracks cap called "poli" -contraction of the French "bonnet de police"- unlike the officers who wear kepi. José María Fernández Saldaña, in an article ("The Paraguayan War in Photographs of the Time", Sunday supplement of El Día, Montevideo, August 25, 1935), reproduces this same photograph and comments on it, suggesting that perhaps it is the greatest Eduardo Vázquez, head of the April 24 battalion, who appears squatting on the edge of the trench occupied by the Uruguayan soldiers.

In the description of the twelve views of the series "War against Paraguay" (El Siglo, edition No. 604 of September 13, 1866), the first reads as follows: "In the shadow of the eastern flag, marches the battalion whose name acquired in a baptism of blood during the Liberation Crusade; He marches with his weapon on his shoulder and on the faces of his soldiers are the traces of feeling for the comrades who perished; of the boldness with which their ranks, already decimated, followed that long career of glories begun in Yatay.

This photograph, of repeated use over time, in the last decades has illustrated covers of works and posters of congresses that deal with the war of the Triple Alliance. Curiously, it has been periodically attributed by Brazilian historiography to a trench occupied by soldiers from that nation. Likewise, the name of the battalion is invariably converted to a date to which the years "1865" and "1866" are alternately added.