EZEQUIEL LINARES AND HIS GENERAL 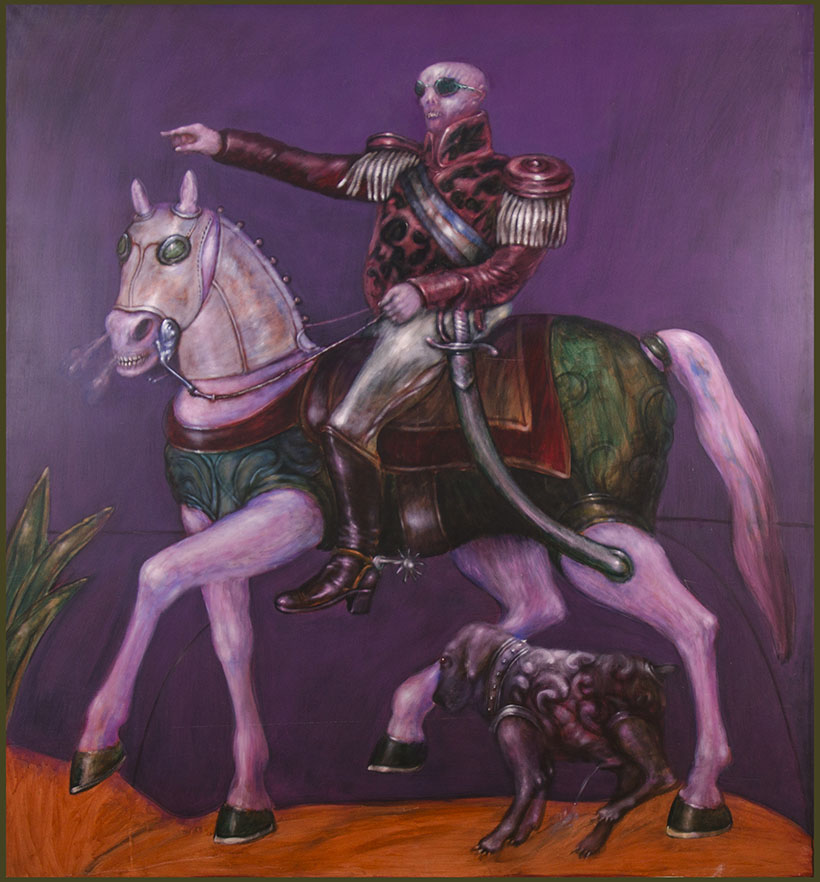 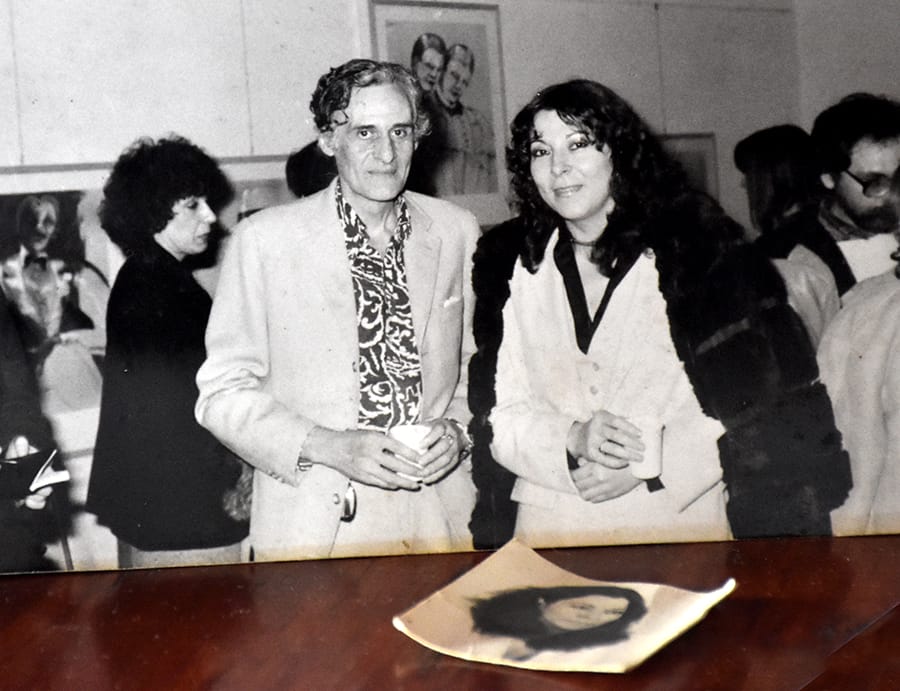 Ezequiel Linares in his study. Illustration of the catalog that accompanied the Grupo Sur exhibition in 1959, at the Museum of Modern Art in Buenos Aires.

Linares with his wife, the plastic artist Yolanda Del Gesso.

University of Buenos Aires, General Sarmiento National University. He has been chief curator of the National Museum of Fine Arts, director of the reasoned cataloging of the latter museum, of the National Museum of Fine Arts of Paraguay and of the Franklin Rawson Provincial Museum of Fine Arts in San Juan. He is currently the regional coordinator of the Monvoisin project in America. Reasoned cataloging of the work of Raymond Q, Monvoisin and his disciples. He has written numerous essays on South American art. Among his curatorships, the most outstanding are La hora americana (MNBA), The viceregal traveler (MNBA), Antonio Berni. Argentine narratives (MNBA), Art of trenches (MHN), Benjamin Franklin Rawson (MPBA Franklin Rawson), The crossing of the Andes (MPBA Franklin Rawson), The body of the portrait. Iconography of Mariscal López (Museo del Barro, Asunción), State Territories (MNBA, Santiago de Chile). He has been a senior researcher on various projects, including José Gil de Castro, Pintor de Libertadores (Lima Art Museum) and consultant for Landscape in the Americas (Pinacoteca de Sao Paulo) and Losing the human form (Museo Nacional Centro de Arte Queen Sofia).

The horse is stout, yet it is not lacking in elegance with its untouched tail, in contrast to the mane. Represented with a cuirass, to the point that the pictorial image seems to refer to the concept of an equestrian monument, the origin of this genre of portraits. The animal shows its teeth in a perverse smile while snorting, this loud snort allows the technical display and at the same time attenuates the sought-after hardness of the figure's limit by generating a punctual transit with the bottom, and establishing a vertical axis with the helmet of the hand, advanced in step. This movement of the front leg plays with that of the maguey, symbol of American territory. The mounted figure is that of a "general", better expressed, the parody of a Latin American general: shiny boots with Nazarene spurs, oversized crooked saber, excessive epaulettes and a crossed patriotic band over a stained jacket as if it were a jaguar, another American symbol. The gesture reproduces that of the cavalry general who has command of the troop; as in Théodore Géricault's portrait of Saint Martin but it does not slow down the horse as in this early lithograph. Nor does it buck, avoiding the expression of control and dominance over the people. The horse goes at a pace, modeled after Rubens' portrait of Philip II. The head of the military man is small, when it is uncovered it shows his baldness, but the central detail is that he wears sunglasses, a topic of the intelligence services, like the horse his blinders. Similarly, he smiles. In the foreground, a hunting dog also "armored" that raises its paw to urinate. This detail is not anecdotal: it offers the key to reading the painting. In addition to what is represented, it stands out formally, in particular because of the chromatic dominance assumed by the contemporary force of pop, and allows to underline the parody of the majestic bearing thanks to the background between violet and purple, and the earth in orange.

Equestrian with a dog is a work by Ezequiel Linares from the series The Long Latin American Night, carried out mainly in the 1970s, in which the image of the generals is hegemonic (the stereotypical face is also found in the series of the Neo-Viceroyalty of the same decade). Alberto Petrina, in his presentation to the 2009-2010 anthological exhibition, pointed out: But Linares not only lives immersed in the past. As he himself pointed out, his work links yesterday with the present and the future in a practically indivisible unity; otherwise and as always happens with the greatest artists, his gaze anticipates the future. What else, if not the ominous years that Tucumán and the country will soon suffer, do the ambushed weapons of the series "The Garden of the Republic" announce to us? And what about the decorated and decorated generals of "The Long Latin American Night"? Are they just an allegorical mention of the still limited tyrant of the late 1960s? Or foreboding portraits of the gang of assassins sharpening weapons for the future and exhaustive slaughterhouse? It is then that Linares distances himself and takes refuge in Madrid. " (1) 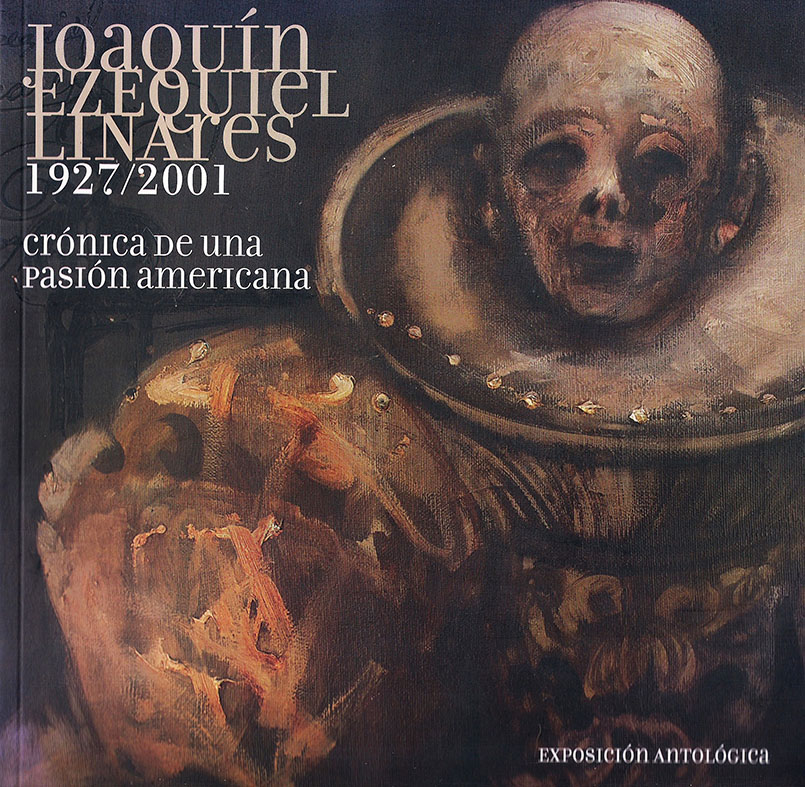 Although he made various series (on tango, the circus and prostitution, among others) the image of the "general president" reiterated in The Long American Night, also indicated as The Long Night of the Generals -the title may well be that of a novela del boom- is one of the hallmarks of Linares's work, along with those early in the Viceroyalty series. In 1972, when exhibiting at the Timoteo Navarro Museum in Tucumán, Francisco Fernández, a critic of Diario Noticias, observed a clear intention of witnessing and denouncing an immediate and palpable reality in countries like ours that have long been paralyzed in all potentialities due to the imposition of eliminating systems. Here the series overlap, are confused, to give way to startling testimonies such as Execution, a notable frieze of violence, The President and a gallery of generals and generals who speak for themselves. (2)

Joaquín Ezequiel Linares, born in Buenos Aires in 1927, trained with Adolfo de Ferrari (a great figurative painter, who is little remembered today, it is worth mentioning the tribute of Antonio Berni when he occupied the same seat in the National Academy of Fine Arts in 1979). His career is associated with a central space in twentieth-century Argentine art: the Department of Arts at the National University of Tucumán. In 1962 he settled in the province to take over the direction of teaching painting. Except for the Madrid period, between 1980 and 1984, he remained in Tucumán, where he died in 2001. Linares granted that institutional space the continuity of technical excellence with the American vision. Thus, Linares is connected with the teaching activity in Tucumán of Lino Enea Spilimbergo, Pompeyo Audivert, Víctor Rebuffo, Lorenzo Domínguez, Lajos Szálay, and other great artists such as Timoteo Navarro - who died early in 1965 - and Luis Lobo de la Vega. If the latter were mainly landscape painters, Linares had an impact on Tucuman art from an advanced figuration that, however, could reflect on regional history and the art of painting. In this sense, she is empathetic with that of Carlos Alonso, another great painter who a decade earlier had settled in Tucumán to follow in Spilimbergo's footsteps.

When Linares, for his part, settled in Tucumán, he was already a recognized artist, but his aesthetics was affirmed in the variants of the abstraction of the fifties. He was one of the members of Grupo del Sur - a name given by the critic Rafael Squirru - along with Carlos Cañas, Aníbal Carreño, Mario Loza, René Morón and Leo Vinci. Linares's abstraction does not lose the ultimate reference to the object, in some cases they can be understood as abstract landscapes resolved in a reduced palette, predominantly of land. Ezequiel Linares, his first name used it little, from the beginning he organized the painting into thematic series, which are not closed chronologically, but rather overlap with other consequent ones. In 1962 he started, already in Tucumán, the Virreinato del Rio de la Plata series, which in the artist's own words was made from popular American imagery, and from the sources of Spanish painting. Linares stressed the past as a creative substrate, enduring and experienced in the present, in his work the American appears with the violence of history and, at the same time, with sarcasm. The "generals" were an interpellation to the political present in Latin America, which could be read from its harmony with contemporary "dictator novels" such as Yo el Supremo by Augusto Roa Bastos and El Autumn del Patriarca by Gabriel García Márquez, with their own pictorial notes. the climate of magical realism. Within the line of his work, this isolated figure of the dictator must be linked to that of the overwhelming viceroys of the 1960s series, a masculine counterpart to those feminine ones marked by absolute depravity, in a shrewd satire. Even the dog appears as a company in both series, in the case of the Viceroyalty of the Río de la Plata with the irony of wearing a gola. This relationship is exemplified by Linares himself when, in the Neo-Viceroyalty series, the "Old Viceroy" has the same smiling, bald and bespectacled face that she used on the generals. If in the sixties he revisited Spanish painting (in particular Velázquez, as was Fernando Botero at the same time) to be awed by a painting of low colors, of strong expressionism, which is affirmed in the Baroque as an American image; In the seventies his palette diversified, with a chromatic force that allows us to think of color as another characteristic of our America, subject to a composition of the figures more sustained in the rigor of the line, without that dissolution with the funds of the representation of viceregal figures. Both series form a plastic narrative from a critical figuration, of which Ecuestre con perro is a notable example.