Cecilia Vicuña: From the precarious to the transcendental. 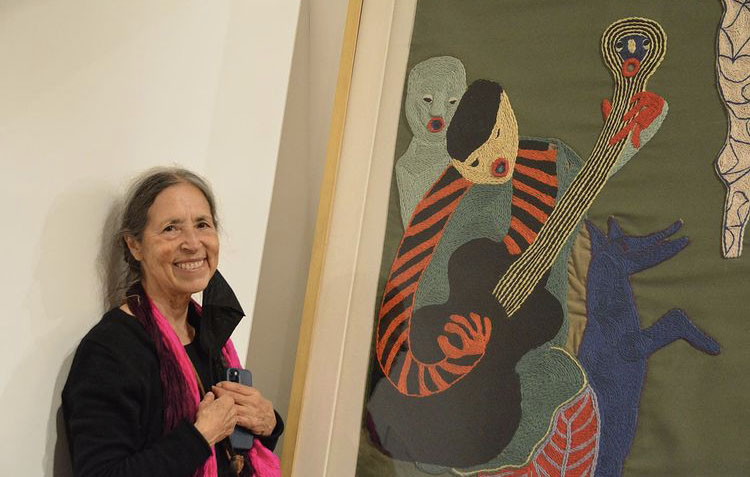 Cecilia Vicuña in front of an arpillera by Violeta Parra, during the Venice Art Biennale 2022. Photograph: www. culture.gob.cl 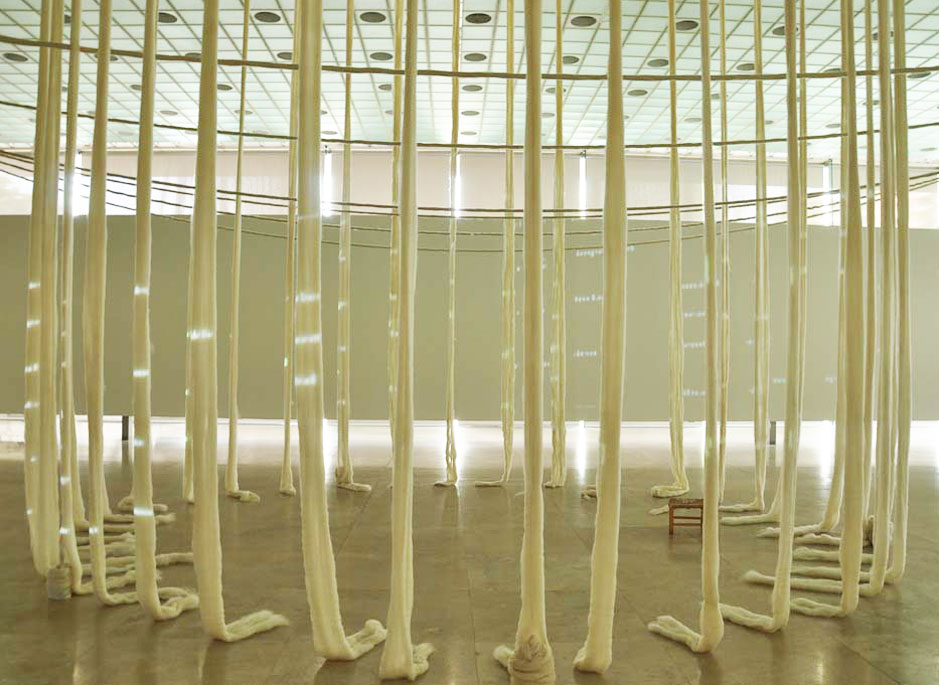 One of the khipus. Installation that is documented with the photographic record. Photography: www.ceciliavicuna.com

Master of Arts at Rice University, in Literature.

She lived for several years in Mexico City where she served as Cultural Attaché for the Chilean Embassy. There she was a member of the Board of Trustees of the Old San Idelfonso College and founded the Chile-Mexico Cultural Board.

She was named Honorary Architect of the College of Architects of Chile, for her contribution to the rescue of architectural heritage and she is a member of the Institute of Historical Commemoration and the Society of Bibliophiles of Chile.

Among the awards received, we can point out the Universidad del Pacífico Award as an outstanding woman, inclusion in the 100 leading women in Chile, by the El Mercurio newspaper, the Chamber of Commerce Award for contribution to culture, the Friends of Art, to the best cultural manager, the appointment of the title of Ambassador of Valparaíso, the SERNATUR Award for contribution to cultural tourism, first female member and director of the Club de la Unión, the World Summit on Information Society Award, to one of the best cultural websites in the world, the Iztaccíhuatl Award, for cultural contribution from the Chilean-Mexican Chamber and the Lebu Cinema Award.

At the age of sixteen, Cecilia Vicuña (Santiago, 1948) was walking along the Con Con beach, collecting objects or trash with which she made her first installations with the waste found, from an ephemeral intention. The astonishment of nature displayed in the wetlands, sea and dunes of the area contrasted with the smoking refinery, installed as a monument to its appropriation. Did she imagine, at that moment, that she was going to become one of the most important artists in the world? What was clear is that such an evident dichotomy would constitute the axis of her work.

Cecilia Vicuña spent her childhood surrounded by books and art, in a family of artists where creating was part of everyday life. Her house was on the outskirts, in a farm with ditches, animals and plants. Today the neighborhood of La Florida is densely built and with a large population. That freedom to wander in her environment, in her condition as a "girl", with less value than the expected "man" allowed her to assume her own voice, taking all the risks.

She had an early lucidity to verify the richness of the natural and the fragility of its permanence in the face of the attacks of humanity. And she today stands before the world with an integrating certainty: whether in a performance, a poem, an installation, a song, a painting; her ancestral connection always appears, whose surname will be America and her condition as a woman. 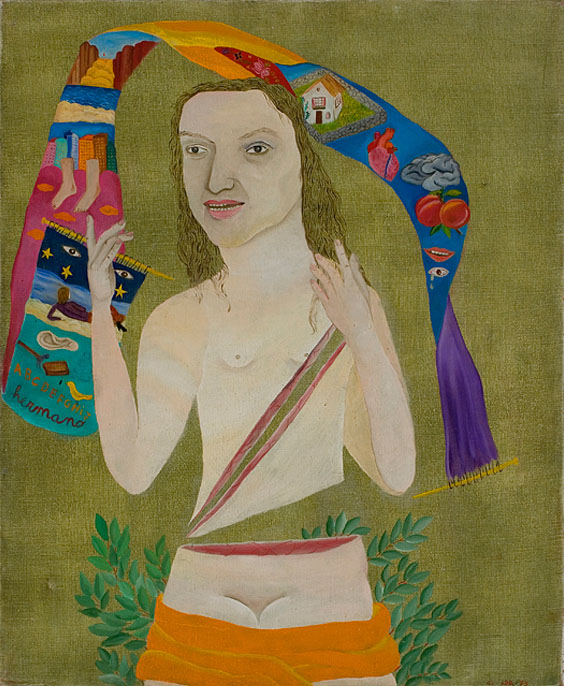 She admires Violeta Parra, who is a source of inspiration, because in her is the tireless search for peasant roots, linked to the land, who have only one way of saying, independent of the chosen format and whose purpose is to merge into the other. When Violeta Parra is asked which artistic expression she would stay with, she says that she would stay with the people, because it is the people who lead her to do what she does (... your song, which is the same song/ and everyone's song, which is my own song).

That drive leads them to travel and live in different countries. They are wanderers. And it also leads them to conceive art in an integral way, using all the available elements.

They are two women who anticipate each other and whose creative force is expressed stubbornly, following their own direction and, therefore, coming from different biographies, they become bright lights.

Today, the two meet at the Venice Art Biennale. In the general exhibition, three of Violeta Parra's arpilleras and a complete room for Cecilia Vicuña who, in addition, received the Golden Lion for Lifetime Achievement, adding a new recognition to her solid career.

She very early she innovated the art with her particular look. When she founded the NO Tribe, she advocated non-doing as action, carrying out different poetic acts in public spaces. Already in 1970 she filled the National Museum of Fine Arts with leaves from the Parque Forestal, adjacent to it. Later, she started Wordarms, as the only possible fight response, through the word. But as her torrent of inspiration spans various formats, she ventures into collage, painting, poetry, performance and film.

But it is in Documenta 14 when he exhibits his quipus, which are the deep synthesis of the latent memory of the original peoples and the heartbeat of Nature. This wisdom knotted in the wool is the symbolic energy of thousands of years of Andean culture. He propitiates, with these works, the change and the creation of a new conscience, from a particular town. For this reason, he declaims his poetry with the sound of water, wind, air, of ancient men. Consciousness implies breaking down, but also building something new.

She has been emphatic in pointing out that it is not possible to see the original peoples as separate, since they should be inserted as an us. This is the only path that will avoid extinction. The artist sees humanity as the species that has invaded the territories of all the others.

Each of the topics that she addresses are today at the center of contemporary problems. This long road of progress and technology has led us to a dead end where going back to the origin is the solution. It is up to art to make visible, risk and, as she has expressed, illuminate failure in order to transform. Her anticipatory art heralds a new era.

Cecilia Vicuña drinks from the honeys of success, which she properly assumes because she built herself from small failures, abandonment and exile to be a voice claiming our place on Earth, as a woman, artist, mestizo and native.